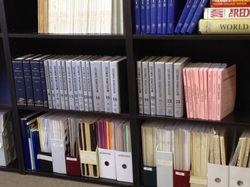 From the estate of Jeanette Schmidt, widow of former Arizona Mayflower society governor L Bernard Schmidt, Jr., state member #2, in honor of his mother, Georgia Perle Wilson Schmidt. She was the founding governor of the state society and AZ member #1.

The General Society of Mayflower Descendants meticulously investigates primary records that substantiate the identity of individuals and families that descend from the Pilgrims who traveled on the ship Mayflower in 1620.

Known first as the 'Five Generations Project' these books, also called the Silver books, are now being researched beyond the first five generations. These avidly collected books are in invaluable tool in genealogy research. Note: Many of the newer 'Silver Books' are Blue because the printer is unable to make the 'Silver' binding.

Our pink 'Mayflower Families in Progress' (MFIP) booklets are silver books in the making. these booklets are made available in soft-cover so that the information can be available to genealogist while further research is underway.